"If you have two loaves of bread, sell one and buy a lily."
old Chinese proverb

Hemerocallis are in the lily family, though some consider them to be more closely related to amaryllis. They differ from lilies as they do not grow from true bulbs.

Hemerocallis / daylilies are easy to grow, colorful, extremely accommodating and will perform under almost all conditions. The daylily can be characterized as a clump-forming, herbaceous perennial with fibrous or somewhat tuberous roots. Preferring well drained, well mulched and sunny positions, it will tolerate extreme damp to very dry sandy soil. Flowers will be more prolific in better soil and in full sun. In heavy shade, foliage may be more abundant with few flowers. Daylilies prefer at least six hours a day for the paler shades, less for the darker reds and purples. If flowers fade, wilt or burn in direct sun, move them to filtered shade.

Daylilies can range in height from 8 inches to 5 feet, and flower size can be as small as 2 inches or as large as 8 inches. Daylilies may bloom the year that they are planted, even from a relatively small plant. They will reach mature size in about three to four years. Daylilies are long-lived if given even moderate care and can be planted just about anywhere.

Daylilies are grown for their rainbow of colors, and many shapes and sizes. There are daylilies in bloom from late spring until autumn. A well-established clump produces many buds and daily blooms for a month or more and many varieties have more than one flowering period. When choosing daylilies, light-colored flowers show up better at a distance than darker ones. Dark-colored varieties standout when planted against a light backdrop.

Besides serving as specimen plants, daylilies are used for color in shrub borders and in perennial beds. They are excellent ground covers on slopes and a recommended material for erosion control.

Use daylilies for blending structures with the terrain, to fill voids or to supply contrast and seasonal color. They have a naturalizing effect to blend fences, decks, steps, statues, driveways or shrubbery with the surrounding landscape. If planting smaller cultivars in containers, choose varieties that repeat their blooming cycle during the growing season. 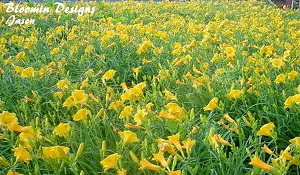 Roots are long, slender, and fibrous OR they may be enlarged into spindle-shaped tubers with additional roots at their bases. Roots absorb water and minerals for use by the plant, and serve as storehouses for food produced by the leaves.

The crown of a daylily is the stem of the daylily plant. It is the solid white core located between the leaves and the roots. The crown produces leaves and scapes from its upper surface. Roots are produced from its sides and lower surface.

Leaves are long, slender, and grasslike. They have a prominent center rib on the underside. Leaves are arranged opposite each other on the crown, giving a flattened appearance which causes the plant to be referred to as a "fan". Multiple fans of a single plant form a "clump."

The scape of a daylily is a leafless stalk which bears the flowers. Most have two or more 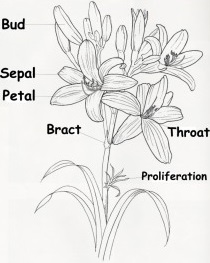 branches, each bearing several flower buds. A reblooming daylily will have an extended or more than one bloom season. Some of these bloom early (e.g., May or June) and then repeat in the fall. Others have a succession of bloom periods, one shortly after another for several months. Deadheading or removing the scape (or stalk) will encourage rebloom. Click here for more scape and flower info

Below the branches, the stalks may have a few "bracts." Sometimes, a small plantlet grows at the junction of a bract and the scape. This is called a "proliferation" and can be rooted to produce another plant.

Hemerocallis are best planted or divided in spring or autumn, but container grown plants may be planted any time. Periods of drought should of course be avoided. Although extremely tolerant of abuse, daylilies respond much better to careful treatment. Recommended planting distance is 12 to 24 inches apart. Planting hole should be larger than the root mass. Work some compost in before planting. https://www.bloomindesigns.com/compost/

The most common problems for daylily performance include poor drainage and planted too deep. 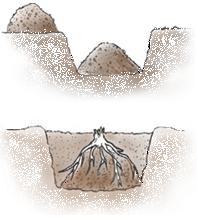 The crown (band of white on the foliage) is the indicator for depth as this should be just below the surface. Set the plant so that the crown is no deeper than 1 inch below the surface of the soil. Firm in when planting, but pressing with your feet can cause root damage.

Water plants thoroughly after planting, and continue to deep soak them at least weekly until established. If they do become dried out during shipment, soak well for at least 15 minutes before planting. Although daylilies are drought-tolerant once established, consistent weekly watering while budding and flowering will produce better-quality flowers.

Daylily gardens should be mulched well with peat or compost in spring. Do not over feed with nitrogen as this causes larger quantities of foliage and less flower ( 5-10-15 and 6-12-12 are good ratios of phosphorous and potash). If the foliage turns yellow this can be an indication that too much (or too little) nitrogen has been applied. Waiting until the plant is established to fertilize will encourage initial root growth. Fertilizer in the early spring just as new growth commences, and again in midsummer. Daylilies prefer a pH of neutral or slightly acidic (6.0 - 6.5). They should not be planted too close to the roots of broad-leafed or evergreen trees.

Daylilies look best if given some grooming through the year. Trim away any browned and dead portions during the growing season to improve the plants condition and appearance. Pruning will stimulate growth, so limit pruning within two months of the first frost. Remove spent blooms and seedpods after flowering to improve appearance and encourage rebloom. When all the flowers on a scape (flower stalk) are finished, cut off the scape close to ground level. Daylilies do not extract next seasons flowers from its foliage. During winter collapsed and faded foliage act as a natural protection for the crown, but you should remove any rotted or damaged foliage.

Daylilies grow rapidly to form dense clumps. Division is not essential but may revitalize flowering if the plants have become crowded.

Dividing is usually done after flowering, but plants will tolerate division throughout the entire growing season. Lift the entire clump or cluster out of the soil with a garden fork. To separate a clump into individual fans, shake the clump to remove as much soil as possible, using the water hose if necessary, then work the roots of individual fans apart. Click here for more information .

Seedlings of a daylily will differ from the parent, as any child might. When seed pods turn brown and start to split, germinate seeds approximately two weeks in any suitable germinating mixture. Cover seeds to a 1/8 to 1/4 inch depth. Place containers in partial shade to prevent drying out. Transplant when roots develop adequately and wait two years for plants to develop a flower.

If small plants develop on the plant scape, these proliferations are easily removed and rooted to form a new plant. Remove proliferations as root begin to emerge and the scape is browning. Plant in potting soil, water routinely to encourages root growth. Root system may be increased by placing proliferation in water first, but try to keep the crown dry.

Patented plants will have a patent number or indicator that a patent has been applied for. Patented plants may not be propagated in any way, shape or form without the owner's permission or until the patent term has expired.

Very few pests and diseases trouble hemerocallis, slugs and snails being the major hazard. Sometimes aphids or thrips can cause failure of the flower buds to open and plants grown indoors can be affected by red spider. Daylilies are not troubled by lily beetle or any other problems of bulbous lilies. Root-knot nematodes may be a problem if your subdivision is on former cropland (especially soybean and tobacco land). Except for crown rot, diseases are not a daylily issue. Crown rot seldom occurs but it is frequently fatal. Having a well drained soil and not transplanting daylilies during the summer heat reduces crown rot potential.