Welcome to our perennial plant nursery!
Imagine More Perennial Plants Than You Can Imagine, Delivered To You.

Astilbes (ass-till-bee) False Goat's-Beard. Saxifrage Family (Saxifragaceae) are handsome plants for, and are all but indispensible, in the perennial border. They are "blenders" among summer perennials almost without equal.

These carefree, mound shape perennials prefer consistently moist, slightly acid, organically rich soil. Soil moisture is critical, but they are not tolerant of waterlogged or heavy clay soils. Astilbes can perform in full sun; but we generally recommend afternoon shade to full shade in the South, and filtered sun in the North. Mulch is helpful in maintaining the constantly-moist ground. Fertilize by working-in compost or a little 5-10-5 (or 5-10-10, or 10-10-10) fertilizer in early spring for best results. 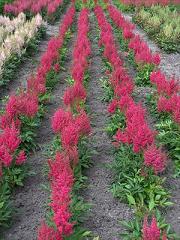 Uses in the landscape include as a focal point or in mass in shade and woodland gardens, near water areas, in containers, for cut flowers (collect when the beautiful plumes are half open); seed heads will enrich scenery into winter.

Hardiness zones 4 to 8, although most cultivars survive zone 3 to 9.

Hundreds of hybrids have been created from approximately a dozen species. The arendsii (ar-end-see-eye) hybrids are the largest group of hybrids involving crosses between A. chinensis (chin-nen-sis), A. japonica (jap-pon-ik-uh), A. thunbergii and A. astilboides. Though arendsii hybrids can vary, usually they are early bloomers and grow 1.5 to 4 feet tall. Chinese astilbes, A. chinensis, bloom later than most arendsii hybrids and generally have better drought tolerance than most other astilbes, although they still do best with uniformly moist soils. Astilbe cultivars in the japonicahybrid group are generally medium-sized varieties (to 3 feet) which bloom in midseason. Astilbe cultivars in the simplicifolia hybrid group are generally compact, low-growing varieties which bloom in mid-season. Astilbe cultivars in the thunbergii group are generally tall varieties (to 4 feet) which bloom late with arching, loosely branched flower panicles.

Combine them with ferns, irises, hostas and other shade and moisture loving plants. 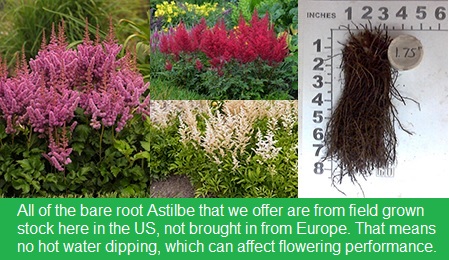 PLANTING: Set out plants in spring or fall, 15 to 18 inches apart. Astilbes prefer partial to full
shade, but may be grown in sun in northern areas if particular attention is paid to maintaining a constant supply of moisture, especially early in the growing season. (Failure to do this will produce poor, chlorotic, unattractive foliage.) A soil well-enriched with organic matter is essential.

MAINTENANCE: Astilbes are vulnerable to drought, and should be watered liberally; year-round mulch will help retain moisture and moderate soil temperature. Other than that, and dividing established plants every few years, preferably in the fall, they are relatively care-free. Their plumy inflorescences, even when dry, provide winter interest, so we suggest that they not be cut back until spring, prior to the onset of new growth. Zones various.

click on the astilbe photos below for additional information.
Bare root Astilbes are shipped in the spring and fall.
Astilbe 1 to 3 eye divisions would typically fit into a 1-gallon container.
Compare Selected
×